The Power of Denial

An interesting thing happened to me the other day. I got thrown of the library for carrying a concealed handgun. 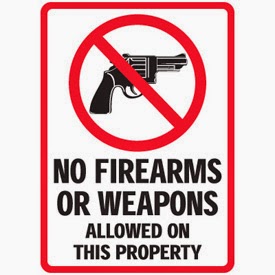 So, I know that public buildings cannot prohibit concealed carry on the premises without metal detectors being installed at every entrance, full time armed security guarding every access point, and securely storage for patron's firearms outside the building.

In fact, even to prohibit OPEN carry of firearms in a public building in my state, the facility needs to clearly post appropriate signage at every entrance. Since none of those were in place at my local library, I naturally assumed that I could patronize this tax-payer funded, public establishment unharassed for my choice to carry a firearm, as I have for the last 5 or more years.

As a homeschooler, the library is a priceless resource. And now that my oldest is consuming literature at a rate of approximately 1,000 pages per week, it is a necessary one. For the last several years, the kids and I spend a couple hours a week at the library. I sit in the back at a table in the children's section either working on my computer or knitting, while my kids search for books and play computer games on the library's electronics. It was a day exactly like any other when it happened.

As I sat quietly in front of my laptop, peeking over now and again to monitor my kids use of the library's electronics, a librarian came over searching the ground for something she appeared to have dropped. I knew the librarian, and had talked with her many times. Once she even complimented me for my children's ability to navigate the search feature of the electronic book catalog.

So I looked up and smiled, wondering if I could help her find whatever she had dropped.

She meekly whispered, "firearm?" I stared at her blankly.

Then she asked me point blank, "Do you have a firearm?"

My gun was concealed, so I didn't need to tell her I was armed. But I also knew full well that the library had no signage prohibiting even the open carry of firearms, so rather than lie or dodge the question, I simply replied, "yes."

Shocked by my response she quickly stated, "You're going to need to take it outside and leave it in your car."

Bless her little heart! I think she truly believed that the inanimate object on my belt would suddenly jump out of its holster without my permission and start discharging rounds in the children's book section! So dangerous this object was, in her sweet uneducated mind, that it must be immediately quarantined from the general population. Yes, the car is a much safer place for such an unpredictable item! Of course, I could stay...I was fine, safe, trustworthy. But that pesky hunk of metal? No way. 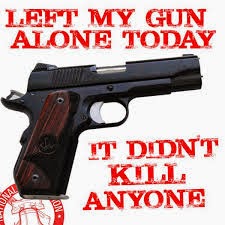 I explained that I was violating no laws by carrying it in the library. I informed her that I had the right to protect my children and myself, and that right was protected by the federal constitution, the state constitution, and state law.

Now slightly flustered by my lack of alarm at what she believed to be a threat to everyone's safety, she plead, "There are no weapons allowed in the library! It's library policy."

Calmly, I asked her to produce a written copy of the library's policy.

From my perch at the back table of the children's section, I watched the librarian scurry to the main info desk. She consulted with several other staff members, walked into the back room. A few moments later, a short gray-haired woman who I recognized as the library director marched toward me, flanked by the little librarian and a Birkenstock-wearing, long-haired library patron, who I surmised was the tattle tail who got me into this mess.

The library director shoved a printed copy of the library's "policy" on firearms at me. I perused it briefly, with the library hens hovering over me. Sure enough, along with an endless list of prohibited devient behaviors, including stalking library patrons, having sexual intercourse in the library, bringing unauthorized pets in the library, the website printout read, "No weapons of any kind allowed in the library, except by law enforcement".

I looked up at the Director, and asked her if she was aware that state law gave me the right to carry a firearm into public buildings? This was her chance to exit stage left and bone up on the law before plunging the library headlong into a lawsuit, but she opted to keep going, and stated with smug satisfaction, "I have the right to prohibit you from exercising that 'right'."  Strike 1.

I asked her what provisions the library had in place to guarantee my children's safety if they were going to prohibit me from protecting them. She confidently informed me that if there was a threat, they would call the police. I asked her what her plan was to keep kids safe while they waited for the police to arrive. She said she'd rather not think about it. The library's official solution for keeping my children safe is...you guessed it...DENIAL. Strike 2.

I asked her if the library had fire extinguishers, sprinkler systems, smoke alarms, and had been inspected by the fire chief to ensure compliance with fire code. "Of course," she replied. "Do you plan to have lots of fires?" I asked. "Would you call the fire department if you did have a fire? Wouldn't you try to put it out first?"

Now I had crossed the line. How dare I drag these well meaning shepherds of knowledge and learning kicking and screaming out of their denial!

She told me I could leave the library immediately or she would call the Chief of Police right now and have me arrested. Strike 3.

Once again, I took stock of my options. I wasn't doing anything wrong and I had broken no laws; in fact, I was just getting warmed up on the whole firearms education stuff. On the other hand, I was all alone in enemy territory with my children. There was now a growing crowd of library patrons who were NOT my allies, and past experiences with local law enforcement have taught me that they're not always concerned about upholding the law.

I decided to cut my losses, a decision the Hubby chastized me for later. But before gathering my things, and herding my children out the door of the public library, I obtained the Director's business card and assured her this wouldn't be the last of me.

I won't go into all of the details of the events that followed my expulsion from the library, but sufficed to say that I felt it my duty to encourage the library to bring its policy into compliance with state law. I am happy to say that months later, my lovely local library has changed its concealed carry policy, and after it all my children and I proudly patronize the library weekly, and yes, I still lawfully carry a firearm every time I step foot in that...uhhh...*begin sarcasm* blessed clearinghouse of knowledge, wisdom, and academia *end sarcasm*. 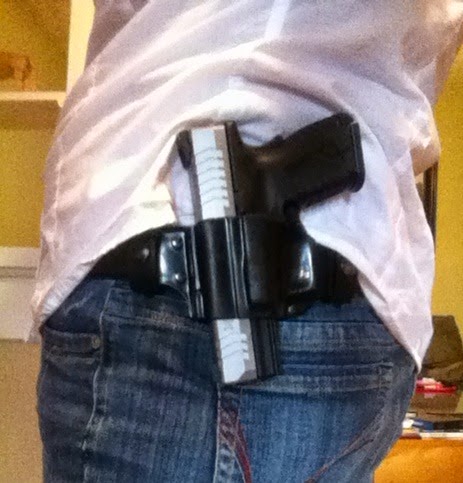 Here's what I learned from this whole ordeal experience:

Denial is a powerful disease.

But later on, the reporter's question struck me as incredibly strange. Do we truly live in a culture where I am expected to surrender my instinct for survival in order to put strangers at ease? Holy smokes. This perpetuation of denial trend is more dangerous that I thought!

Perhaps concealed carry in America has done a great disservice to our rights and freedoms by taking guns out of the public realm. Though concealed carry was originally lobbied for by those who carried firearms for protection for the tactical advantage it gave them in an emergency, it has now become the armed citizen's curse by  emboldening the denial of an entire generation of Americans. The library can't do anything about whether or not I carry a firearm, but by posting a sign prohibiting OPEN CARRY, they can make it so they don't have to look at armed people.

Denial soothes the populous into believing that if they just comply, follow the rules, keep their heads down, don't piss anyone off, don't do anything to stand out or draw attention to themselves, everything will be all right. I bet that's exactly what the Jews thought in Hitler's Germany.

Denial convinces society as a whole that there will always be someone around to protect us when we need it, so there's no need to come up with a back up plan, or to put ourselves in positions to maximize our chances for survival until the appropriate authority arrives.

And even more tragically, denial assures otherwise incredibly intelligent people that their children are safe from violence at school, in the face of mountains of evidence to the contrary.

I'm not sure what the solution is, or if there is a solution at all. But I'm confident of a few things.  The mere fact that I carry a gun and make preparations to take responsibility for my family's safety makes people uncomfortable. If I cater to the denial that has infiltrated our society, the world will not be a safer place. However, if there ever is a life threatening emergency, the same people who hate me today for exposing their denial will demand I protect them when their lives are threatened. And more than likely I will, if it's in my power to do so.
Posted by Well Armed Housewife at 12:26 AM 2 comments

Well Armed Housewife
I'm a passionate, gun-toting, home birthing, homeschooling wife and mother who believes our rights come from God, our food comes from the farm, and our ability to defend ourselves keeps us free.